Why The Experts are ALL Wrong

I find that I can no longer go along quietly. I need to speak out against something that has bothered me tremendously for many, many years. I have been watching our entire country and much of the world abdicate to doctors, against all common sense, the health and welfare of their infants. Doctors are not Gods. They are fallible beings. And I am convinced that about this they have been WRONG! I am talking about babies sleeping on their backs.

Babies should be sleeping on their stomachs. There are many reasons for this but first and foremost, they sleep better – which is good for them and their parents. Sleeping well is good for their brains, bodies, development, health, happiness and well being.

The Back to Sleep campaign turned 20 last year. It’s been 20 years and billions of dollars spent on a campaign that has been the single-most harmful thing to happen to children in recent history. This campaign which promised to help save infants has only hurt and damaged them. There have been no benefits whatsoever. The number of Sudden Infant Death Syndrome (SIDS) cases has not decreased. Did you hear that? No reduction in the rate of SIDS!!!

That is because at the exact time the “back to sleep” campaign started, the CDC changed its definition of SIDS and created an umbrella called Sudden Unexpected Infant Deaths (SUID). Any baby deaths which aren’t easily explained are investigated and then labeled as SIDS or Accidental Suffocation Strangulation in Bed (ASSB) or one of a number of other new categories. Deaths which were formerly all labeled SIDS are now spread over a number of labels. 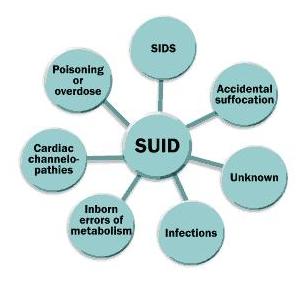 Used with permission from Centers for Disease Control and Prevention

Yes, the SIDS rate has been declining significantly since the early 1990s. However, CDC research has found that the decline in SIDS since 1999 corresponds to an increase in SUID deaths during the same period. When added, categories actually exceed the number of SIDS cases ever reported.

Especially targeted since these new labels came about are babies co-sleeping with other humans such as parents and older siblings. The assumption is that any baby not sleeping alone is at risk of having been suffocated. Any baby sleeping with soft blankets and pillows at the time of death is investigated. Any baby caught sleeping with a trianglar wedge (ironically used to keep him from rolling to his stomach) is investigated. But when you read about these investigations, they seem very biased. There seems to be an assumption that if a child is bed-sharing, he was suffocated. If there is a heavy comforter, he suffocated. Because there is no good way to test for suffocation at autopsy, most of these deaths, after the investigation, are then grouped under the new accidental suffocation label (ASSB).

From the National Center for Maternal and Child Health: “The majority of these suffocations happen to infants while they are in unsafe sleeping environments. These infants suffocate when another person lays over them or when they smother in bedding or furniture. This is the fourth leading type of accidental death for all children, following motor vehicle crashes, fires and drowning. Overlay deaths are most often caused when an infant sleeps with adults or older siblings (bed-sharing). Bedding deaths occur when infants sleep with too much bedding or when they sleep in beds other than cribs. They suffocate because the bedding is usually too bulky or soft for infants. Hazardous sleeping surfaces include waterbeds, couches, large pillows, or soft or heavy comforters”

1992 was the year that the American Academy of Pediatrics began recommending that infants be put on their back (supine position) instead of their stomach (prone positon) when being put down for sleep. At the time more than 75% of parents put babies on their stomach for sleeping. The recommendations of the AAP have grown more strident over the years; moving from only recommending back sleeping to reduce the risk of SIDS to saying that ONLY the back was safe.

So why did this campaign begin initially? My research isn’t coming up with a clear-cut answer. I think most people think it’s because SIDS babies were ones who suffocated while sleeping on their stomachs so if they sleep on their backs they won’t suffocate. That was part of it. But there was additional research at the time of the campaign’s beginning showing that babies slept less soundly on their backs and that SIDS victims possibly had brain-stem defects making them unable to awake from deep sleep so all babies should be put on their backs to avoid deep sleep. Also, babies in China commonly slept on their backs and SIDS was lower there so, clearly, we should sleep babies on their backs too.

Why would the American Academy of Pediatricians (AAP) who began this campaign think a baby would suffocate on his stomach? From the beginning of time, babies have been sleeping on their stomachs. Here is a quote from T. Berry Brazelton’s Infant and Mothers, 1983 edition. “Placed on his belly, head down, the infant has a set of reflexes that make it almost impossible for him to smother in that position. He picks his head up off the bed, then turns it to one side or the other. He begins to crawl with his legs and can even lift himself up on his arms. Occasionally newborns flip themselves completely over to one side or the other – all as part of reflex responses with which they are equipped at birth.”

My own children were able to crawl to me at birth when left on their stomach at the bottom of the bed – supposedly following the smell of breast milk. This phenomenon of newborn slithering can be googled and watched on you tube. These reflexes are likely vestiges of being evolved mammals. The elaborate contortions a blind and hairless baby kangaroo goes through to get out of its mother’s uterus and into her pouch to suckle at her mammeries are the same reflexes humans are born with. The point is, babies are mobile. They can find air when they need to.

Babies are intrinsically led to move in ways which perfectly strengthen and tonify them. One of the problems with sleeping children on their backs is the lack of opportunity to develop their neck muscles. This is leading to “gross motor milestone” delays and is even negatively impacting social skills. Here is Penelope Leach from Your Baby and Child. “By six weeks most babies will have got their necks sufficiently under control to be able to balance their heads upright as long as whoever is holding them keeps still…. Over the next six weeks or so those neck muscles get firmer and his control moves gradually down to include his shoulders…By the time he is three months old the control of his head will be complete.” This is simply no longer true. I now regularly hold 6 month old babies who cannot hold up the weight of their own heads.

Here is a further sampling of the damage done by the “back to sleep” campaign:

I sat at a my daughter’s math competition in a large high school auditorium filled with 6th, 7th, and 8th graders. As I looked at the row of children in front of me I was struck with the fact that each and every one of them had a distinct flatness to the back of their heads. We are simply changing the shape of humanity.

A newborn has just spent his time in-utero curled forward in a scrunched up position. After birth his body very naturally curls itself inward no matter what position he is in. His large and heavy head act as “an anchor and a pivot” according to Penelope Leach. It is always turned to one side. The most natural position is for him to be on his stomach with his heavy head down, still turned inward but to the side. 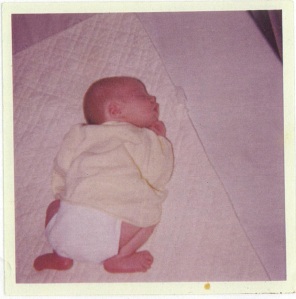 Babies develop from the top down and the middle out. This is something everyone learns in Child Development 101. It is called the cephalocaudal-proximodistal trend. Babies will use their upper limbs before their lower limbs and gross motor development will move from the center out so they will move their arms laterally before they will grasp with their fingers. Therefore the neck, upper back and arms are the first things the baby can control. Because of inborn reflexes, they can also scoot and lift their head. And a newborn can only focus his vision about 12 inches (the distance to his mother’s eyes in the nursing position). So in the tummy down position, everything is working for him. He can focus on what is in his line of site because it is all close. He can also easily reach his hands for self soothing and his Moro reflex which causes him to flail and startle is not activated on his stomach.

We develop as individuals the same way that we evolved as humans. In a prone position, a baby will slither like a snake. Before long he discovers he can use his arms as support to push up to his chest  like a lizard. If given lots of free time on the floor he will: roll; army crawl symmetrically; pull his legs up and see-saw on all “all fours” like most mammals. Soon he is standing upright and walking just like homo sapiens.

When I was a sought-after babysitter in the 1970s, you could predict what was happening in every house in our child filled neighborhood. Under 12 months children were put down to sleep on their stomachs from 9-11 and 1-3. The only difference from house to house was whether a particular mother took off the lace-up white leather shoes. After nap a child was fed and a non-mobile child put in his playpen on his back. Once he could crawl he was allowed to play in certain kitchen cabinets and a gate was put up at the basement stairs.

In that neighborhood, children were rolling from stomach to back by 8-10 weeks. Children were rolling from back to stomach by 12-14 weeks. Why not give a child two months to sleep in this natural and safe position where he develops the strength to then be free to move to his back if he wants to. This seems like the most natural thing in the world to me and gives him so much more agency over where and in what position he would like to be.

This misguided campaign has not only NOT reduced infant deaths but has created a myriad of developmental problems and delays and our children are suffering tremendously because of it.

13 Responses to Why The Experts are ALL Wrong