Did you know purposeful movement builds brain cells and neuron synapses? Each time the brain makes the body work, your baby has built a fatty pathway in his brain which he can then use for other things. Imagine that! When he is trying to reach for that toy and is guiding his hand toward it? Guess what? Brain building happening! Don’t move that toy closer! Please! 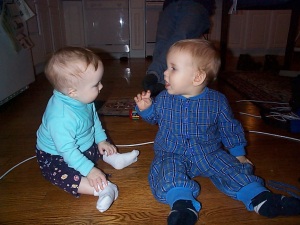 and as she reached to gather the two belt of the “seat-belt” herself, I let her. And for TWENTY-FIVE MINUTES she continued to try. She would drop one, struggle to pick it up. She struggled to have those two hands work together to bring the butterfly clasp together. She knew exactly what needed to be done and she felt up to the task of trying. After nearly half an hour (with people coming in and out rooting for her), she let go, looked up, sighed and gave me the most beautiful self-satisfied smile I’d ever seen. She didn’t CARE that she hadn’t clasped the seat-belt. She was so proud of her efforts.

Your child is a self learner and will be able to teach himself most of what he needs to learn. We give children opportunities to teach themselves and trust them to be the initiator, explorer, and self learner. People like to call Montessori an “auto-didactic” philosophy of education. I contend that as humans we are auto didactic beings. A child who has been allowed to intentionally focus, build strength, know his limits, determine his movement has graceful integrated movements. Thus the two words you need to remember at all times:

How can we help children with free movement?

2. By keeping their environment at the right temperature or clothing them properly. Some underweight babies who aren’t dressed warmly may be using their energy to keep warm instead of using it to develop.

3. By wearing non-restrictive clothing. Pants cannot be too tight. No dresses on crawling babies (they will crawl onto the bottom of the dress and choke themselves.)

4. No overalls on children interested in potty training. It takes too long.

We can’t ask infants to develop on our schedule. This is especially true in the area of gross motor development. But of course all of the developmental domains are inter-related. His movement is a function of his cognition. His socialization is influenced by his emotional attachment. A baby is tension free. His does not get fatigued by moving. If given a chance to initiate, he will. Watch. He explores. He develops. We just need to stay out of his way.

Most of our interventions are harmful. For instance, when we put him in an upright car seat before he has moved to the sitting position on his own, we are compressing his chest, neck and tracheal. In the LA times in November 2001 there was an article about breathing difficulties of infants, especially pre-term babies. Sometimes they suffer sleep apnea in car seats. There is a car seat called the Dream Ride made by Cosco for $93 on Amazon. It allows babies to be on their back until they are ready (when they sit on their own.)

We need give information to children, not directions. “Your foot is near the edge of the stair.” “Learning to fall, get up again, and move on, is the best preparation for life.” Magda Gerber.

A child moves with such elegance and efficiency when he moves and develops on his own schedule. His inner agenda is so important to his spatial relationships and sensory skills. Why are there so many sensory issues now? Are babies not exploring enough?

Children know what they can’t do. Babies raised this way are coordinated and graceful but they also know their limits. I knew a child who climbed onto a bookshelf that wasn’t attached to the wall and pulled it down. The same girl also fell out of a tree. I also noticed her mother often “saved” her at the last minute from her precarious adventures, grabbing her just as she was about to have a mishap. She didn’t learn correctly because of her hovering mother saving her from the natural consequences of gravity and other natural phenomena.

Newborns can sleep when tired, feed when hungry, have a fully developed sense of touch and can communicate their needs to us. Sucking is a reflex and a baby can begin to organize himself to find self soothing strategies. But he needs freedom. He needs freedom to find his thumb (no swaddling) and to organize and learn about his body.

When a child moves on his own, from one activity to another, he gains intelligence, discovers his abilities, makes use of his knowledge, experiences success and failure. All of that is happening without you. He is learning that but you are not teaching it. If there is one thing I would want to help parents to prepare themselves for – it is to give their babies free movement!